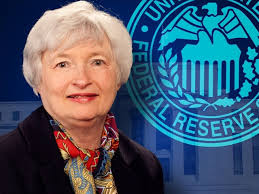 WASHINGTON (MarketWatch) — Sounding an upbeat note, Federal Reserve Chairwoman Janet Yellen said she expects the U.S. economy to strengthen over the rest of 2015 and put the central bank on a path to raise interest rates “at some point this year.”

Yet the Fed chairwoman gave no hint on when or how many times the bank is likely to raise a key short-term interest rate that has been hovering near zero since 2008. Most Fed watchers think the bank will make its first move at a mid-September meeting.

In her twice-year testimony before Congress, Yellen was notably more optimistic compared to her last appearance in February. But she deviated little from a speech she gave last Friday in Cleveland in which she laid out her views.

“Many households have both the wherewithal and the confidence to purchase big-ticket items.”

“Looking forward, prospects are favorable for further improvement in the U.S. labor market and the economy more broadly.”

She pointed to cheaper gasoline prices, higher consumer confidence and a pickup in consumer spending, particularly new cars and trucks. That suggests “many households have both the wherewithal and the confidence to purchase big-ticket items,” she said.

Although hiring has slowed from a torrid pace at the end of 2014, Yellen said the economy is still creating enough jobs to reduce the unemployment rate over time. The jobless rate was 5.3% in June.

She also said “other measures of job market health are also trending in the right direction,” but there is “still some slack.”

For the first time, Yellen also made clear reference to specific events overseas, namely Greece and China, that could “pose some risk” to the U.S. economy.

The “situation in Greece remains difficult,” she said. “And China continues to grapple with the challenges posed by high debt, weak property markets and volatile financial conditions.”

Nonetheless, Yellen appeared to indicate that the risks are small.

“If the economy evolves as we expect, economic conditions likely would make it appropriate at some point this year to raise the federal funds rate target.”