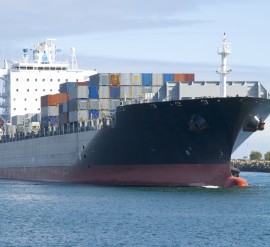 We just got a major sign that world trade is crashing

The Baltic Dry Index, which measures the price of shipping the world’s major commodities, just touched an astonishing new low.

On Thursday it hit 504, less than half of what it was as recently as August. On Friday it dropped below 500 for the first time ever.

The index has always been used as a bellwether indicator for global trade conditions and the state of the international economy, but it attracted special attention after it pointed to the coming financial crisis back in 2008.

It has been far lower than its precrisis peak ever since. It touched record lows earlier this year before recovering, but it is now in the doldrums again.

Here’s how it looks over the past few years:

It has become a bit less popular because of its considerable pitfall — it spiked to over 10,000 before the financial crisis and hasn’t returned to even half that level in seven years.

Former BI reporter Vincent Fernando explained back in 2009 why the index could be so volatile. In short, it’s because small changes in supply and demand can tip the balance of whether buyers or sellers have the upper hand:

Imagine you have 10 loads of iron ore and 9 ships, and that every load of iron ore must be sent no matter what while every ship must be filled no matter what. Imagine the bidding war between those 10 iron ore consumers fighting over just 9 ships. Shipping cost would skyrocket since they all need to ship regardless of cost. Now imagine if a week later two more ships enter the market. Now imagine the bidding process. Suddenly the tables have completely changed. You have 11 ships, that all need to be filled no matter what, and only 10 loads of ore. Shipping rates would plunge, despite a period of just a week passing by.

So though it’s still watched, there’s a lot of scepticism about it.

But a fascinating blogpost from Bond Vigilantes last year shined some light on how reliable it is as a proxy for world trade. There was actually a strong correlation from the beginning of 2010 to mid-2014. Here’s a snippet:

We’ll keep looking at the Baltic Dry Index for the same reason that we like the Billion Prices Project for inflation. When you can find a daily priced, publically available measure or statistic that comes out a month or more ahead of official data and is a strong proxy for that data it’s very valuable.Cargo