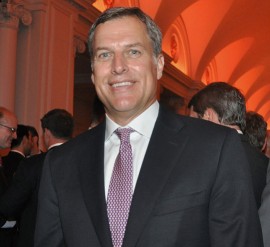 In any other industry you might assume that a move toward transparency and a client-centered approach would be a given. Not on Wall Street. For the stockbrokers of the world, it’s borderline heresy.

John Thiel, the head of Merrill Lynch Wealth Management, found out just how unpopular the idea of “clients first” can be after making comments at an industry event last week that suggested the brokerage giant will cooperate with Washington on requiring stockbrokers to meet a higher code of conduct.

The Department of Labor and the White House have been nudging the retirement advice industry toward a fiduciary standard, rather than what’s known as the suitability standard. Currently, stockbrokers need only show that their retirement investment advice is “suitable” for the client, even if the broker is secretly paid to offer a specific fund or is otherwise conflicted. Under a fiduciary rule, all that goes away. Stockbrokers would have to put the client first. Public comments on the potential rule change will run for 75 days before a rule can be made.

“As an industry we should work in a constructive and collaborative manner that’s in the best interest of clients,” Thiel told 200 retirement industry executives at a Chicago event put on by the Securities Industry and Financial Markets Association. “It’s obviously the right thing to do.” While not a ringing endorsement of a blanket fiduciary approach, Thiel’s call to work with Labor ran counter to the reigning sentiment among stockbrokers and their employers, who mostly want the issue to go away quietly.

If this controversy seems familiar, it’s because the DOL tried to get a fiduciary rule off the ground five years ago and failed to get traction in an industry that was dead set against change of any kind. Now the top man at Merrill seems to be calling for cooperation, if not acceptance, in hopes of managing change that suddenly feels inevitable.

The new rule, if enacted, wouldn’t end side compensation for retirement advisers, but it would make them act in their clients’ interests first and force them to disclose how they are paid and by whom. “The rule is intended to provide guardrails but not straitjackets,” Labor Secretary Thomas Perez told reporters.

It isn’t an inconsequential matter. A White House Council of Economic Advisors study found that conflicts result in a loss of 1 percentage point of return for affected investors, adding up to $17 billion a year.

The proposed rule would broaden who is regulated by the fiduciary standard to include just about anybody acting as a retirement adviser, whatever their title. It also would require full disclosure of otherwise hidden fees in products, “backdoor” payments to advisers and similar shenanigans that might lead to a conflict of interest.

At Rebalance IRA, we agree with Thiel that a fiduciary standard for retirement advisers is an obvious change for the better and one that is long overdue.

Will Thiel change minds on Wall Street? Let’s hope so. The retirements of millions of Americans depend on it.